On Wednesday, five Republican Senators fired off a letter to Netflix’s Ted Sarandos over the streamer service’s plan to have the executive producers of Game of Thrones  adapt Chinese author Liu Cixin’s sci-fi trilogy The Three-Body Problem. Tonight, Netflix’s VP of Global Public Policy fired back, nicely but firmly.

Accused of “normalizing” the Chinese government’s brutal incarceration of more than 1 million Uyghur Muslims by making a series of Liu’s award-winning books, Dean Garfield politely reminded the legislators that “Netflix does not operate a service in China.”

In a Q&A format to cut to the chase, the executive made it very clear that just because the author of The Three-Body Problem supports his government’s inhumane policy, the company, EPs David Benioff and D.B. Weiss and others working on the adaption do not.

“Netflix judges individual projects on their merits,” Dean Garfield told Senators Marsha Blackburn (R, Tenn.), Rick Scott (R, Fla.), Martha McSally (R., Ariz.), Kevin Cramer (R., N.D.), and Thom Tillis (R., N.C.). on Friday. “Mr. Liu is the author of the book – The Three Body Problem – not the creator of this show,” Garfield added. “We do not agree with his comments, which are entirely unrelated to his book or this Netflix show.”

Winner of the prestigious Hugo Award in 2015 with the first book in the trilogy, The Three-Body Problem examines humanity’s first contact with an alien civilization. Earlier this month, Netflix revealed that the GoT EPs are turning the book into a series as a part of their $300 million overall deal with the company. Along with Brad Pitt’s Plan B, Last Jedi director  Rian Johnson and Rosamund Pike being connect to the project too, Alexander Woo, co-creator of AMC’s The Terror: Infamy, who signed an overall deal with Netflix in February, will write and EP the Three-Body Problem series with Benioff and Weiss. 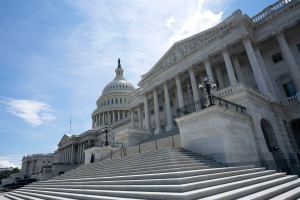 In their September 23 correspondence to co-CEO Sarandos, the five GOP Senators asked if senior executives at the streamer were aware of the statements made by Liu and quoted in the New Yorker last year before they made a deal to adapt his work.

The magazine’s Jiayang Fan asked Liu in the 2019 piece about the internment camps in Xinjiang province in northern China. She detailed: “He trotted out the familiar arguments of government-controlled media: ‘Would you rather that they be hacking away at bodies at train stations and schools in terrorist attacks? If anything, the government is helping their economy and trying to lift them out of poverty… If you were to loosen up the country a bit, the consequences would be terrifying.’”

Based on those comments and the tensions between the Trump administration and Beijing, the Senators in their letter of Thursday pressed Netflix “to seriously reconsider the implications of providing a platform to Mr. Liu in producing this project.”

“We have significant concerns with Netflix’s decision to do business with an individual who is parroting dangerous CCP propaganda,” the Senators asserted. “In the face of such atrocities in XUAR, there no longer exist corporate decisions of complacency, only complicity.”

Today’s response makes it pretty clear that Netflix believe they are guilty of neither complacency nor complicity.” Which means, this is nowhere near over in this year of election.

READ THE FULL LETTER TO THE GOP SENATORS HERE:

Thank you for your letter from September 23, and your interest in the upcoming Netflix series adaptation based on The Three-Body Problem.

First, we’d like to note that Netflix does not operate a service in China.
We address your questions and concerns below:

Q: Does Netflix agree that the Chinese Communist Party’s interment of 1.8 to 3 million Uyghurs in internment or labor camps based on their ethnicity is unacceptable?

A: Absolutely. As the UN Declaration of Human Rights (which China has signed) states “all human beings are born free and equal in dignity and rights.”

Q: In order to avoid any further glorification of the CCP’s actions against the Uyghurs, or validation of the Chinese regime and agencies responsible for such acts, what steps will Netflix take to cast a critical eye on this project – to include the company’s
broader relationship with Mr. Liu?

A: Mr. Liu is the author of the books, not the creator of this series. Mr. Liu’s comments are not reflective of the views of Netflix or of the show’s creators, nor are they part of the plot or themes of the show.

Q: Were Netflix senior executives aware of the statements made by Mr. Liu Cixin regarding the CCP’s genocidal acts prior to entering into an agreement to adapt his work? If so, please outline the reasoning that led Netflix to move forward with this project. If
not, please describe Netflix’s standard process of due diligence and the gaps therein that led to this oversight.

A: Mr. Liu is a Chinese citizen living in China – he is the author of the books, not the creator of this Netflix series. The creators are David Benioff and D.B. Weiss, the creators of Game of Thrones, and Alexander Woo, executive producer/writer on the series True Blood.

Q: Does Netflix have a policy regarding entering into contracts with public-facing individuals who, either publicly or privately, promote principles inconsistent with Netflix’s company culture and principles? If so, please outline this policy. If not, please
explain why not.

A: Netflix judges individual projects on their merits. Mr. Liu is the author of the book – The Three Body Problem – not the creator of this show. We do not agree with his comments, which are entirely unrelated to his book or this Netflix show.