“I imagine we will be on his radar and I think it is likely the IRS will start auditing my taxes, but that’s just a guess,” The Comey Rule director Billy Ray said  today on how Donald Trump will react to the upcoming Showtime event series. “I think at the very least, I’m in for a mean nickname on Twitter,” the Captain Phillips screenwriter added.

The actor playing ex-Celebrity Apprentice host may be in for a bit more than a mean moniker, in Ray’s estimation. “I wouldn’t want to expose any actor to the flack that I imagine Brendan is about to get from our current President,” he very seriously said Brendan Gleeson. “Ireland may not be far enough away,” Ray joked of the Irish actor’s current location.

‘The Comey Rule’ Review: Jeff Daniels-Led Event Series May Be Most Important Drama Of This Election Year

Starring Jeff Daniels as former FBI Director James Comey and Harry Potter alum Gleeson as Trump, The Comey Rule airs on September 27-28 on the ViacomCBS-owned premium cabler. Always sensitive to his depictions on the small screen, Trump is revealed in the show based on the 2017 fired Comey’s A Higher Loyalty book as a man unsuited for his office, thin skinned, corrupt and potentially place in the White House with the help of Vladimir Putin.

It was the latter element that drew Ray to the story and making the series, the writer, director said Thursday on a virtual panel with Daniels and other cast members.

“I don’t think any writer, director had been given the opportunity that I have right now, to tell a story as it is unfolding,” Ray admitted of the timing of The Comey Rule as Trump and Joe Biden are going into the final stretch of this year’s election. “To be a part of a national conversation right before a national election. That brings with it enormous responsibility, and enormous obligation, but as long as we’re being truthful in our storytelling, I feel that we’re a match for that”

With Daniels, Michael Kelly (Andrew McCabe), Jennifer Ehle (Patrice Comey), Oona Chaplin (Lisa Page), and Steven Pasquale (Peter Strzok) participating from their own homes over Zoom, Ray made a point of noting that even with the partisan politics at play, the series wasn’t meant to be didactic but primarily informative, in a dramatic way – even with Comey himself as an on-hand “resource,” as the director called the former top cop.

“We didn’t make this series to change people’s votes, at least for me,” he said. “The reason that I did this was because I felt that the Russians had had a profound and an unhappy effect on our political process in 2016 and I wanted the American public to know about that before they went to the polls in 2020,” the director stated.

In terms of the 2020 election, The Comey Rule appeared DOA for a bit as the Shari Redstone controlled ViacomCBS scheduled the series for late November, AKA well after a COVID-19 ravaged America had gone to the polls. That seemingly politically inclined programming decision saw Ray put passionate pen to paper in protest in late June. Yet, the filmmaker is not convinced his action ensured the high level corporate reaction soon afterwards to move The Comey Rule to now before the closely contested election.

“I think it’s lovely and kind of romantic that people think that little old me wrote a letter that backed off a company the size of Viacom,” Ray asserted today of his true influence. “I don’t think that’s actually what happened … I don’t think I made Viacom change their minds.”

“I think that they knew that the viability of this as a commodity just had so much more value before the election than after the election,” he explained “They’re in the business of attracting eyeballs and that was going to happen in September and I just think it was much less likely to happen in late November,” Ray continued. “So I think that they were always on their way to reversing that decision, and if anything, my letter gave them a little bit of cover, so that they could do it more easily.” 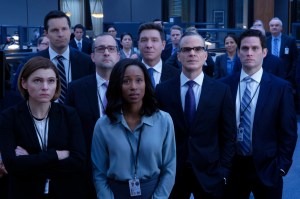 “I think those people are in the business of making smart decisions and I’m so grateful that they made this smart decision, cause I think it is going to be good for everybody.”

The Comey Rule is executive produced by Shane Salerno, Alex Kurtzman, Heather Kadin and the Oscar-nominated Ray. It is produced by CBS Television Studios in association with Home Run Productions, The Story Factory and Secret Hideout.

How to Make a Shepherd’s Pie Topped With Tater Tots

How to Binge Watch Our Favorite Emmy Nominated Shows

Our Annual Year: Best Of Entertainment