Here’s the main reason why the NWO globalist cabal is dead set on mandating a universal COVID-19 vaccination program. No, it has nothing to do with vaccine-induced immunity being the only way to control this wholly manufactured pandemic and staged panic triggered by their bioengineered novel coronavirus, which has been stealthily disseminated throughout 5G-intensive urban areas around the world.

State of the Nation

In 2005, a highly classified presentation was given to DoD officials and military brass at the Pentagon about the top-secret FunVax Program.

A video of a short segment of that Pentagon briefing was secretly taken by a whistleblower which can be found here: FUNVAXgate: A Pentagon Scheme to Totally Neutralize the God Gene (Video).

There are at least 3 essential takeaways from that extremely revealing and radioactive presentation made by an experienced bioweapon scientist who appeared to be the point man for the FunVax project. As follows:

(1) The U.S. Military biological weapons program has been creating a vaccine that is specifically formulated to immunize targeted individuals and populations against the expression of the God gene, also known as vesicular monoamine transporter 2 (VMAT2). The suppression of VMAT2 has been a primary goal of US biological weapon laboratories for decades with the ostensible purpose of neutralizing terrorists who act on their religious fanaticism. However, the real goal is to inoculate people the world over against the inclination toward spiritual pursuits and/or mystical experiences (see the screenshot below). Some deep insiders have even surmised that the real purpose of the FunVax is to permanently stunt soul development.

(2) The most practical form that a VMAT2 vaccination program can take in light of the necessity for extreme secrecy is a respiratory virus, which could be covertly released throughout any city or nation or region of the world. This would eliminate the problem posed by those societies that are averse to vaccinations administered by injection. Religious cultures, in general, are increasingly fearful of the true intention behind immunization shots. Many folks have not only experienced and/or witnessed adverse vaccine side effects, they are also rightly skeptical of their efficacy.

(3) The proposed FunVax vaccine would be aerosolized in a manner similar to the systematic, wide area and indiscriminate spraying of chemtrails over the unsuspecting population below. Because the U.S. Armed Forces have forever denied the existence of chemtrails, most citizenries have been conditioned to falsely believe they are contrails. In this way, aerosolized vaccines can be furtively administered to the citizenry of any nation that illicitly permits chemical geoengineering operations.

*For an in-depth discussion of the FunVax vaccine, as well as the VMAT2 gene also known as the God gene, the following detailed investigation provides numerous scientific facts that lend a high degree of credence to the existence of this U.S. military bioweapon program: An In-depth Investigation of VMAT2 and the FunVax Vaccine

KEY POINT: The FunVax was initially framed as a military strategy to neutralize terrorists throughout the Middle East. It took the U.S. Military 7 years to deploy that particular bioweapon which manifested mainly in Saudi Arabia as Middle East respiratory syndrome (MERS) from 2012 through 2020. South Korea, another country with a large American military presence which undergoes constant chemtrailing, also suffered a substantial MERS outbreak in 2015. 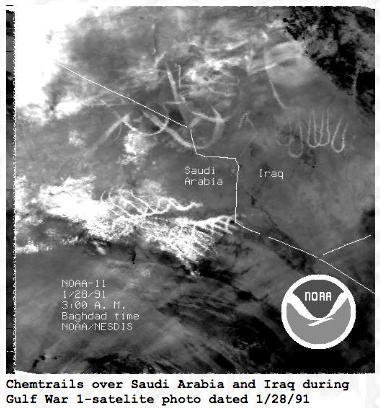 ~ MERS is just one example of an “aerosolized vaccine” delivered via chemtrails that specifically targeted the militant Wahhabi sect of Islam in Saudi Arabia from 2012 to 2020. The Wahhabi terrorist network was created by NATO and the Military & Intelligence Communities of the Zio-Anglo-American Axis just like ISIS was in the Northern Levant. ~

Everything points to COVID-19 as a FunVax bioweapon that has been purposefully released worldwide via various means of propagation in order to exponentially multiply the vectors of dissemination of the concealed VMAT2 vaccine.

Hence, the primary goal of OPERATION COVID-19 is to significantly diminish religiosity throughout the world community of nations, especially in those countries that are integral to the formation of a totalitarian One World Government. Those nations are primarily the Western military powers of the Zio-Anglo-American Axis that are members of both NATO and G20.

In point of fact, the New World Order agenda cannot be successfully implemented within those nations where the citizens have strong spiritual impulses and devout religious practice. The NWO globalist cabal will have an even more difficult time wherever there is a historical tradition of mysticism such as India, or an ongoing spiritual revival as experienced by the Pentecostal and Evangelical Christians throughout the West.

Therefore, the only way forward for the New World Order globalist cabal is to fully activate their “Quaternary Weapon System” that was designed to facilitate the VMAT2 vaccination process. See: QUATERNARY WEAPON SYSTEM Activated Before Each Coronavirus Cluster Explosion

Leaving nothing to chance, the perpetrators of OPERATION COVID-19 have gone full-bore with each of the four weapon systems directly involved with the vaccination of all of humanity. The four main methods of immunizing against the God gene in 2020 were previously posted in this exposé: Here’s the NWO Scheme to Enforce Mandatory Vaccinations.

Each of these four bioweapon systems is being surreptitiously used to rapidly and synergistically administer a global VMAT2 vaccination regime, among other other malevolent purposes.

Texas’ MJ Hegar on Why She Decided to Run for Senate After Losing in...