Teen shot one of his victims five times including in the head, complaint says

This came moments after Rittenhouse fatally shot Joseph Rosenbaum, 36, of Kenosha, and Anthony Huber, 26, and called a friend to say ‘I’ve killed someone’

Wisconsin is an open carry state so Grosskreutz, 26, could legally carry a gun

Rittenhouse, a police-obsessed Donald Trump supporter, appeared before a judge briefly on a Zoom call on Friday.

His extradition hearing has been pushed back another month. He will return to court on September 25

Huber’s devastated girlfriend broke her silence over his ‘murder’ Friday, saying her ‘heroic’ boyfriend died trying to save the lives of her and other protesters

Jacob Blake, 26, was shot seven times in the back by a cop in front of his three young children Sunday, leaving the father-of-six paralyzed

By RACHEL SHARP FOR DAILYMAIL.COM and ASSOCIATED PRESS 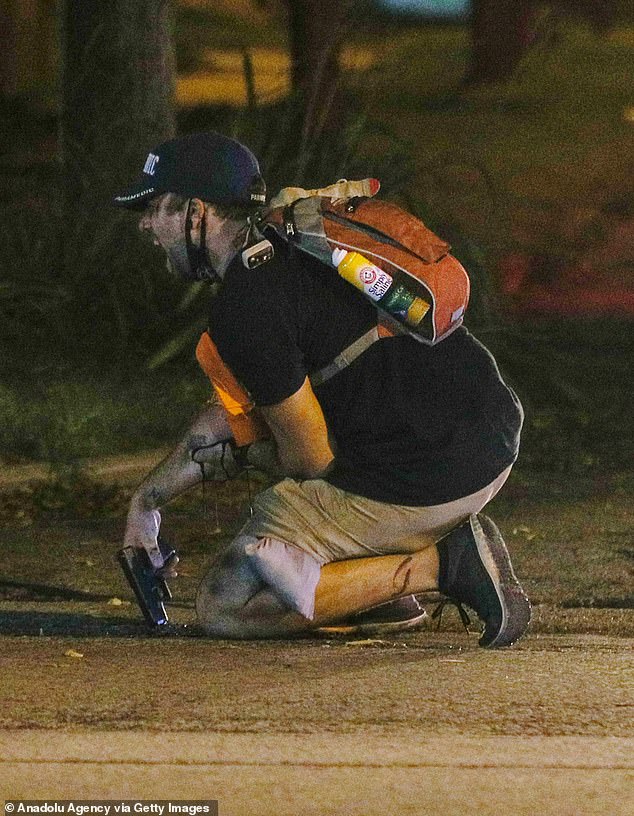 Grosskreutz pictured clutching his bloodied arm after Rittenhouse allegedly shot him at close range Tuesday night (He only appears to be carrying a handgun to the media.)

Kenosha shooter Kyle Rittenhouse shot one of his victims five times including in the head, the criminal complaint reveals – but his attorney has claimed it was he who was ‘attacked’ and insisted he was acting in self-defense.

Rittenhouse’s attorney Lin Wood said the 17-year-old vigilante was ‘attacked’ with ‘lethal force’ and ‘had the right to defend himself’ when he shot dead two unarmed Black Lives Matter protesters and injured a third man in the streets of Kenosha Tuesday night, as new video reveals a different angle to one of the attacks.

Footage has emerged online of the suspected killer shooting his third and only surviving victim Gaige Grosskreutz in the arm while the 26-year-old was carrying a handgun.

This came moments after Rittenhouse is accused of fatally shooting Joseph Rosenbaum, 36, of Kenosha, and Anthony Huber, 26, and calling a friend to tell them ‘I’ve killed someone’.

Rittenhouse is accused of riddling Rosenbaum with bullets, with the criminal complaint revealing he shot his victim a total of five times – in the right groin, back, left hand, left thigh and right side of his forehead.

Huber’s devastated girlfriend broke her silence over his ‘murder’ Friday, saying her ‘heroic’ boyfriend died trying to save the lives of her and other bystanders.

Rittenhouse, a police-obsessed Donald Trump supporter, appeared before a judge briefly on a Zoom call on Friday.

His extradition hearing has been pushed back another month. He will return to court on September 25.

The teen is faced with murder charges while outrage builds nationwide over the different treatment by cops of the white armed teen compared to their treatment of black unarmed man Jacob Blake.

Blake was shot seven times in the back by a white cop in front of his three young children Sunday afternoon, leaving the father-of-six paralyzed from the waist down.

The 2nd Amendment gives you the right to bear arms. After that you’re on your own. Various jurisdictions have a plethora of laws on the use of arms. So my father’s advice of the best fight is the one you don’t get into. I feel guns are not the answer. They may wind up being the answer unfortunately. That’s why God told us not to murder each other. Generally we are at the mercy of lying governments and the media setting up a narrative that leads us into the trap of violence. Once in it, it is hard to get out of it. That’s where the teachings of Jesus are profound. Karl has a lot on his plate standing up for what he believed in. The media is portraying Mr. Grosskreutz as the hero victim. The pistol in his hand defines his intent. He came to fight. He got one. He seems lucky it wasn’t worse.

All through history we are seduced to fight for powers we don’t understand. It’s time to get out of that trap. The media is one catalyst. They try and convict in the public eye those they despise and acquit their minions. That is part of the trap as well. As a broadcaster, I understand the court of public opinion and offer appeals on air. Anytime the media convicts quickly based on raw emotion and little to no evidence fairly collected and presented, there is injustice.

Here’s why they attacked Kyle Rittenhouse in Kenosha.

“Rosenbaum lit a dumpster on fire, and they were going to roll it down the street into some police cars. Kyle then put the dumpster out with a fire extinguisher. This pissed off Rosenbaum, who then pursued Kyle, while Kyle was being shot at by other Antifa for putting out the dumpster fire and being identified as a Trump supporter. Rosenbaum then got shot by Antifa at least twice, he had 5 rounds in him and Kyle only shot 3, and if I got the story right, all 3 shots from Kyle came later, when they were trying to get his gun away from him. Even if he did shoot at Rosenbaum, he did not kill Rosenbaum. The fatal shot to Rosenbaum came from behind.”

All About Simone Rocha’s H&M Collection For Women, Men, Kids