Right-wing commentator Avi Yemini was thrown to the ground by police and arrested as he covered the anti-lockdown protests in Melbourne.

Yemini, 34, was reporting for fringe U.S. media outlet Rebel News and doing a piece to camera in Albert Park on Saturday as police clashed with protesters.

As he was recounting the day’s events, a police commander suddenly pointed him out and ordered officers to arrest him.

‘This bloke here is not here for any purposeful reason, I want him under arrest right now,’ the officer, a superintendent, said while grabbing his microphone. 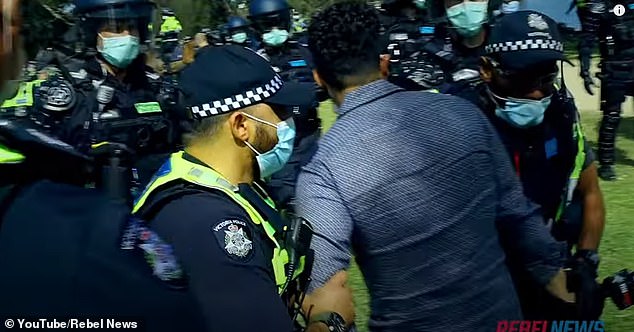 The liberal world order will not be kind. As the tentacles grow, it will downright evil. In other police states reporters join the ranks of the disappeared. You see the hate rhetoric in the corporate approved media here even though they are abused by totalitarian states too.

Wise, Thoughtful Elder Won’t Put A Sock In It

Area Man Knows Nothing Good Ever Happens When Godzilla, King Kong Find Themselves In Same Movie

How to Keep Your Kid’s Artwork From Piling Up

Would Tarek El Moussa Do a Reality Show With Heather Rae Young?

The Bridgerton Cast Talks Their Hot and Heavy Period Drama