I can remember them saying that ‘everything changed after 9/11’. It did, but certainly not for the better. I think we can all agree on that. I remember how everyone surrendered their rights and key aspects of democracy, all in the name of ‘keeping us safe’.

Back then, world-changing decisions were made in reaction to an exaggerated threat, with sweeping ‘emergency measures’ and laws enacted. Usually, nothing good follows from a government that is making decisions and formulating permanent policy, suspending constitutions and rights – imposing all of this on a population operating from a position of fear. That much we did learn. Some of us did anyway.

In January, like a leviathan sprung forth from the titans Oceanus and Ceto in ancient Greece, the global coronavirus pandemic was born. Like 9/11, it was a disruptive event, but this time on a scale unimaginable. Whether or not one believes this was naturally-occurring or a biologically-engineered pathogen (there is every reason to believe it could be), it is beyond argument that this ‘crisis’ is and will be used to advance a multi-pronged globalist agenda, likely to feature more wars between the great powers.

Modern man is now entering realms of dystopia only imagined before by the likes of Aldous Huxley and George Orwell, with more than a hint of Philip K. Dick. What makes all of this difficult for so many is that the sudden transition has been almost instantaneous, leaving people in a near callow state of bewilderment, wondering what just happened to their old life.

No matter which way this situation goes, it’s almost certain life will never be the same.

By now we should be familiar with the story: a novel coronavirus, scientifically known as SARS-CoV-2, or COVID-19, has made its way across the planet, infecting millions of people and registering over 100,000 deaths (as of the time of writing) across 180 countries. The victims of this outbreak are overwhelming elderly persons over the age of 70 and those in palliative care, most of who have severe and chronic underlying medical conditions.

Make no mistake about it – this is a disruptive event on a scale the modern world has never seen before. The shock and awe began from the moment the story broke from the Chinese city of Wuhan in Hubei Province. Global audiences were inundated with images of Chinese authorities putting hundreds of people into biological suits, hosing down the outside of buildings, before quarantining themselves in their apartments. Then began a state-sanctioned medieval-style program that western media and politicians enthusiastically dubbed a “lockdown,” a term aptly borrowed from the prison industrial complex.

Wuhan was an unforgettable spectacle which really impacted the western psyche, such that when the coronavirus made it to European and North American shores, the public was already conditioned to expect a Chinese-style response from their own governments. Not surprisingly, this is exactly what they got and, in fact, it was what they demanded. 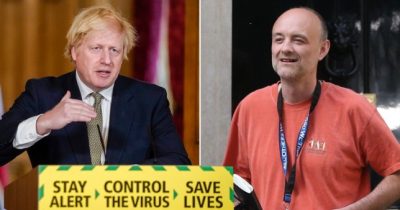 On 12 March, British Prime Minister Boris Johnson called an emergency press conference where he took to the podium, flanked by his two leading science advisors, Sir Patrick Vallace and Chris Whitty, who proceeded to explain the government plan of action which was centred around the commonly known epidemiological concept of “herd immunity.” Their strategy was a familiar one because it has been the orthodoxy in modern epidemiology – allow a virus to go through approximately 60-80% of the population in order to achieve herd immunity, naturally extinguishing the virus in a single season.

But Johnson made the fatal error of grossly overestimating the death rate at 1% of the total infected, an estimate that would have left the country with some 52 million infected and 500,000 fatalities. Of course, in hindsight, these numbers were pure fiction, but at the time everyone was so enveloped in fear that they believed the ‘experts’. Nonetheless, the herd immunity approach was more or less identical to the ‘no lockdown’ approach taken by European countries Sweden and Iceland, as well as Belarus, Mexico, and Japan. This would entail standard random sample testing nationally and for those exhibiting COVID-19 symptoms. The elderly and vulnerable people would be told to self-isolate for a period of time while studies were conducted.

‘Plan A’ didn’t last long. On 24 March, Johnson appeared on national TV, this time without his science team, to announce a nationwide lockdown – an effective shutdown of society and most of the country’s economy. The UK was now following fellow NATO member states France, Italy, Spain and others, which had already imposed draconian national lockdowns, including strict new ‘social distancing’ guidelines preventing people from being together.

It appeared that Johnson’s sudden 180º degree turn was prompted in part by an alarmist report generated by one of the government ‘expert’ teams at Imperial College London, led by controversial computer modeler Neil Ferguson who was previously responsible for the 2001 ‘Foot and Mouth’ crisis, a debacle which ended in the unnecessary culling of some six million livestock in Britain.

This time, Ferguson and his team worked their modelling magic to come up with an estimated half a million coronavirus deaths if the government did not implement “very intense social distancing and other interventions now in place.”

DECLARATION OF CANADIAN PHYSICIANS FOR SCIENCE AND TRUTH

Now Is Not the Time to Travel to Indigenous Nations in the U.S.

How to Get Your Collectibles Appraised