As he traveled, a video was posted to the president’s Twitter account in which he thanked the American people for their support

Ivanka, Barron and Jared Kushner have all tested negative, as has Vice President Mike Pence 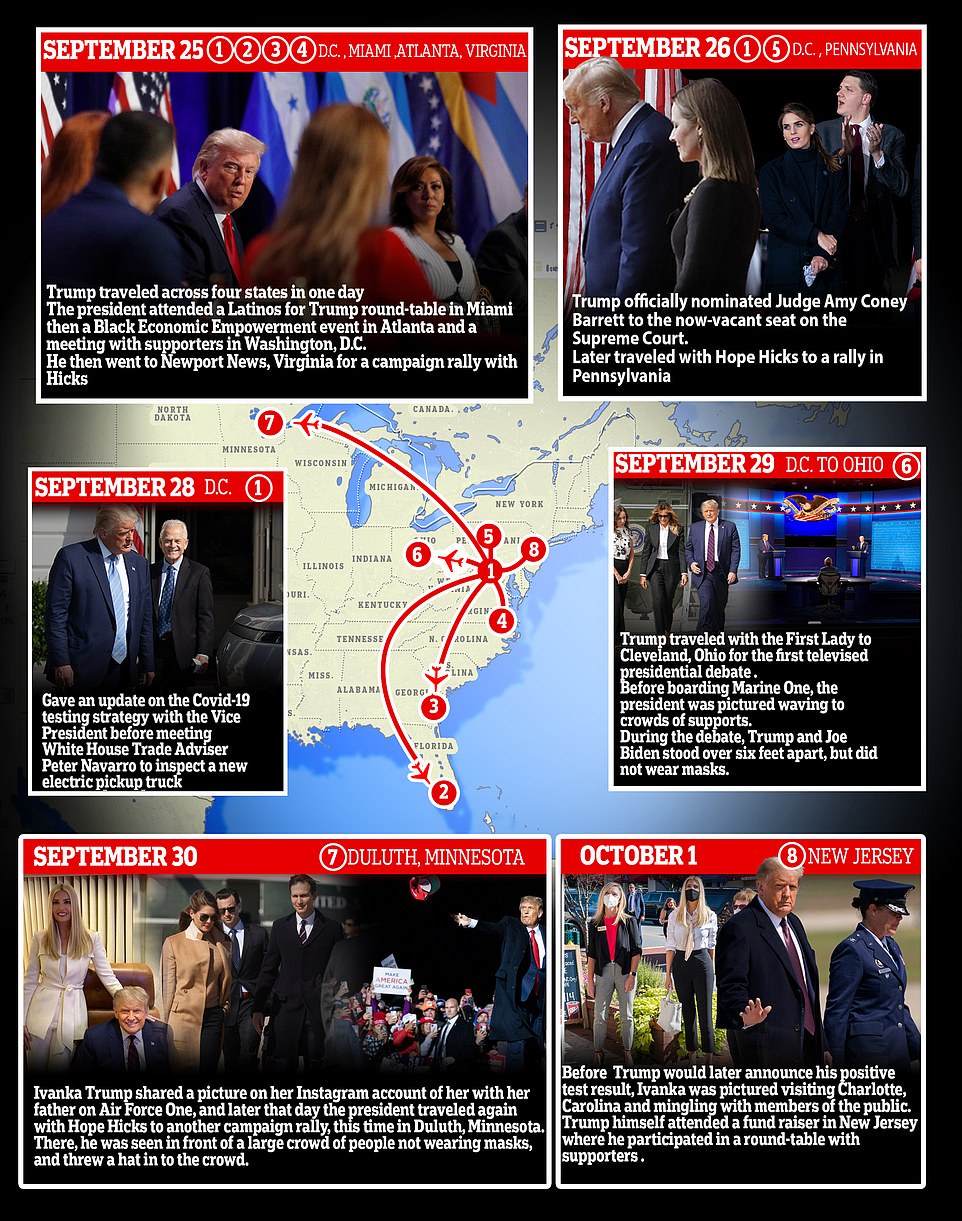 President Donald Trump, who tested positive for the coronavirus, gave a ‘thumbs up’ as he walked from the White House to Marine One to be airlifted to Walter Reed Military Medical Center on Friday evening.

The President is being admitted to hospital for tests ‘out of an abundance of caution’. He is expected to remain in hospital for ‘a few days’ where the White House says he will continue working.

He waved to reporters on the South Lawn but didn’t speak as he walked to Marine One. He walked on his own with no help.

Chief of Staff Mark Meadows was with him, also wearing a mask. Several senior White House staffers, including press secretary Kayleigh McEnany, were on the lawn to watch the president’s departure. They were also wearing masks, an unusual image for the Trump White House.

Trump walked slowly down the stairs of Marine One when he arrived on the hospital grounds after the 15-minute journey holding on to the handrail as he descended.

He got into a waiting motorcade for the short ride to the hospital, where he will be admitted into the presidential suite.

In a video message posted to Twitter, the President thanked the American people for their support following his diagnosis.

‘I want to thank everyone for the tremendous support. I’m going to Walter Reed hospital, I think I’m doing well, but we’re going to make sure things work out,’ he said in the 18-second clip.

‘The First Lady is doing very well. So, thank you very much, I appreciate it. I will never forget it.’

Trump and the First Lady Melania Trump announced they tested positive in the early hours of Friday morning and at the time were self-isolating at the White House.

Melania, who tweeted that she has ‘mild symptoms’ has not been taken to hospital with the President.

On Friday evening, Eric Trump tweeted that his father ‘is a true warrior’ and asked Americans to ‘join me in praying for his recovery’.

‘He will fight through this with the same strength and conviction that he uses to fight for America each and every day,’ Eric wrote. ‘I ask you to join me in praying for his recovery. I have never been more proud of someone and what they have had to endure.’

White House Communications Director Alyssa Farah confirmed that Trump had not transferred power to Vice President Mike Pence, despite his hospitalization. ‘The president is in charge,’ she said.

Pence is at the Naval Observatory where he lives. He tested negative for COVID on Friday morning.

Earlier today, Trump’s physician said he was treated with a single dose of Regenron’s experimental polyclonal antibody cocktail. He added that the President was ‘fatigued but in good spirits’. 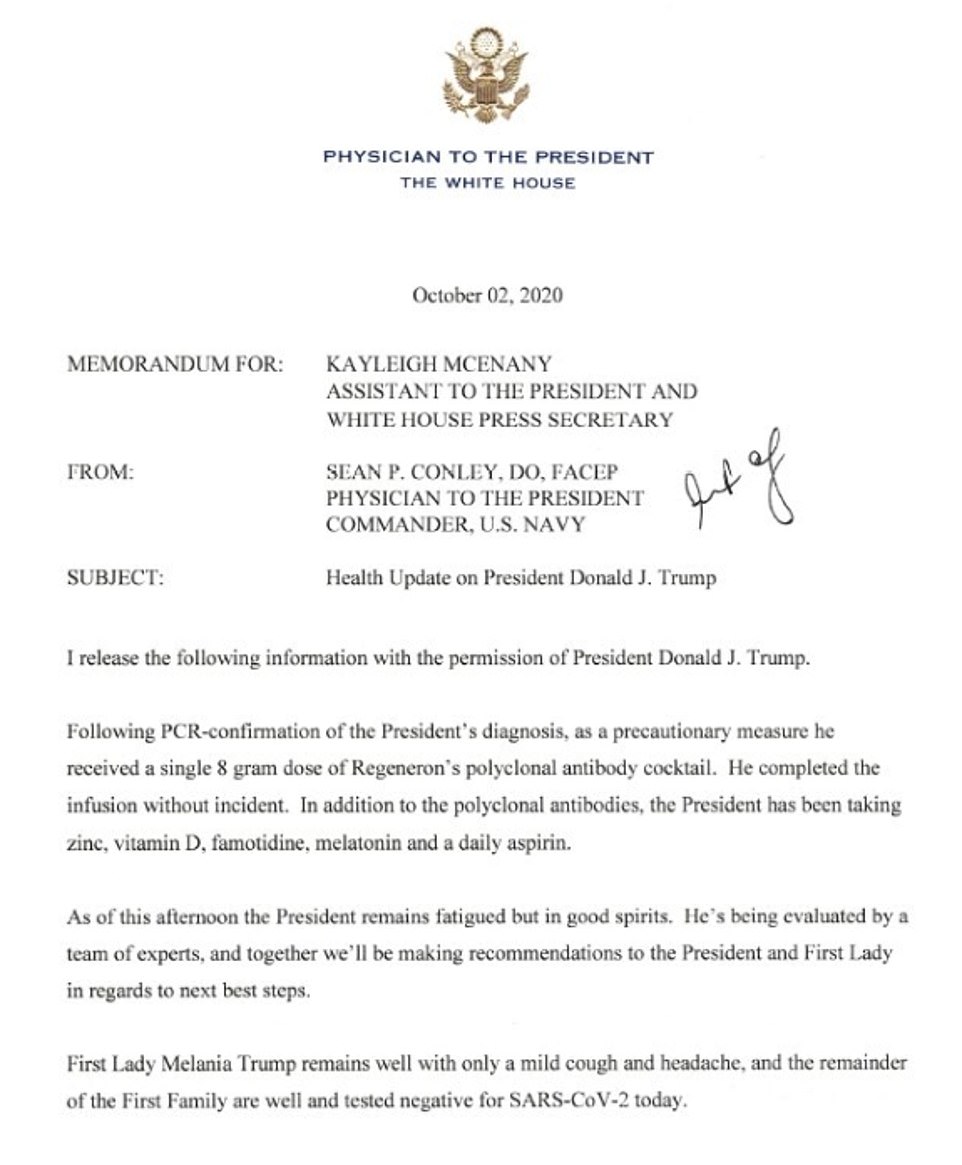 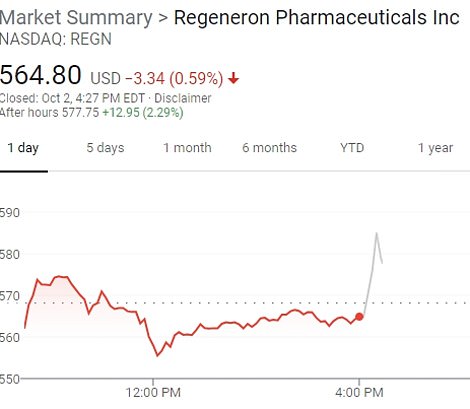 It’s just a precaution on the global stage where the actors play their parts. You could make a ton of dough on the markets as an insider.

‘Has Anybody Seen A Blue Folder?’

Get Free Food From McDonald’s, Now Through Christmas